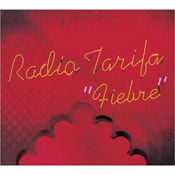 “Named after a fictional radio station at the southernmost tip of Spain, Radio Tarifa ostensibly would broadcast to the Iberian Peninsula as well as the southern shores of the Mediterranean. Proving that the distance between flamenco and Arabic music, electric and ancient instruments, and African and pop rhythms aren't all that far apart, the aptly named band is a crossroads of musics, cultures and eras. Strong musicianship pulled it together on its three studio efforts, and does so again here on the group's first live album, which was recorded in 2002. While fans are treated to two new songs, the older ones are a revelation as well, offering up fresh versions of favorites like "Ronda de Sanabria," "La Mosca," and "Tangos del Agujero." Indeed, the band seems to be playing to the crowd and for each other throughout, which is the best reason to document any group in the live setting.” Tad Hendrickson